the vocal samples have been performed by Dome Bulfaro and recorded in Milan, CPM Studios, in July 2017.

This exhibition is part of the residency Enciclopèdia dos Relacionamentos Humans (Encyclopedia of Human Relationships) held on the island between the 15.07.2017 and the 31.07.2017). curated by Mark Fell 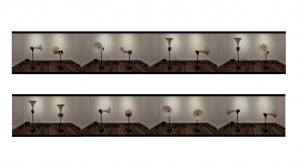